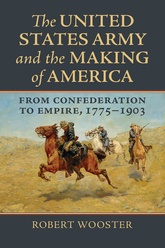 The United States Army And The Making Of America: From Confederation To Empire, 1775-1903

The United States Army and the Making of America is the story of how the American military—and more particularly the regular army—has played a vital role in the late eighteenth and nineteenth-century that extended far beyond the fields of war. Repeatedly, Americans used the army not only to fight their enemies, but to shape their nation and their vision of who they were, often in ways not directly associated with shooting wars or combat.

Author Robert Wooster’s exhaustive research in manuscript collections, government documents, and newspapers builds upon previous scholarship to provide a coherent and comprehensive history of the U.S. Army from its inception during the American Revolution to the Philippine-American War.