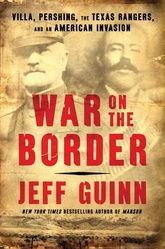 War on the Border: Villa, Pershing, The Texas Rangers, And An American Invasion

Author Jeff Guinn tells the riveting story of Pancho Villa’s bloody raid on a small US border town in 1916 that sparked a violent conflict with the US. The “Punitive Expedition” was launched in retaliation under Gen. John J. Pershing’s command and brought together the Army, National Guard, and the Texas Rangers.

The American expedition was the last action by the legendary African-American “Buffalo Soldiers.” It was also the first time the Army used automobiles and trucks. Curtiss Jenny airplanes did reconnaissance, another first. One era of warfare was coming to a close as another was beginning.

Today Anglos and Latinos in Columbus, New Mexico, where Villa’s raid took place, commemorate those events, but with differing emotions.