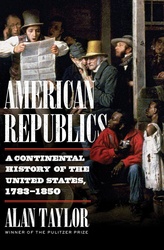 American Republics: A Continental History Of The United States, 1783-1850

The reality of the Republic

In this beautifully written history of America’s formative period, a preeminent historian upends the traditional story of a young nation confidently marching to its continent-spanning destiny. In truth, Native peoples sought to defend their homelands from the flood of American settlers through strategic alliances with other continental powers. The system of American slavery grew increasingly powerful and expansive. Bitter party divisions pitted elites favoring strong government against those espousing a democratic populism for white men. Violence was both routine and organized.

Absorbing and chilling, American Republics also illuminates the continuities between our own social and political divisions and the events of this formative period.