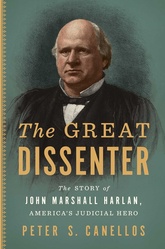 The man behind a legal revolution

Written by the award-winning Peter S. Canellos, The Great Dissenter is the definitive biography of an American hero who stood against all the forces of Gilded Age America: Supreme Court Justice John Marshall Harlan.

Almost a century after his death, it was Harlan’s words that helped end segregation, and gave our country civil rights and modern economic freedom. But his legacy would not have been possible without the courage of Robert Harlan, a slave who John’s father raised like a son in the same household.

Spanning from the Civil War to the Civil Rights movement and beyond, this compelling biography of Harlan is also an epic rendering of the American legal system’s greatest failures and most inspiring successes.