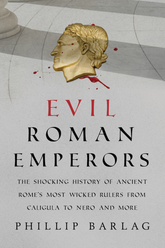 Evil Roman Emperors: The Shocking History Of Ancient Rome's Most Wicked Rulers From Caligula To Nero And More

The dark side of Rome

Roman history is replete with people and stories that shock our modern sensibilities. Evil Roman Emperors puts the worst of Rome’s rulers in one place and offers a review of their lives and a historical context for what made them into what they became.

Lucius Tarquinius Suburbus called peace conferences with warring states, only to slaughter foreign leaders; Commodus sold offices of the empire to the highest bidder; Caligula demanded to be worshipped as a god; even the Roman Senate itself was made up of oppressors, exploiters, and murderers. Author Phillip Barlag profiles a host of evil Roman rulers across the history of their empire, along with the governing bodies that condoned and even carried out incredibly heinous acts.