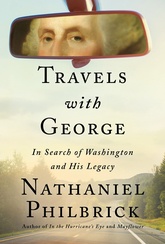 Travels With George: In Search Of Washington And His Legacy

When George Washington became president in 1789, the US was still a quarrelsome confederation. Washington undertook a tour of the ex-colonies to talk to ordinary citizens about his new government, and to imbue in them the idea of being one thing—Americans.

In the fall of 2018, author Nathaniel Philbrick embarked on his own journey into what Washington called "the infant woody country." Travels with George grapples with Washington's legacy as a man of the people, a reluctant president, and a plantation owner who held people in slavery. Philbrick comes to understand how Washington compelled, stood up to, and listened to the many different people he met along the way—and how his all-consuming belief in the Union helped to forge a nation.