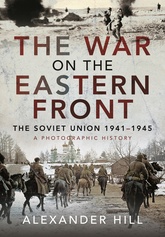 Visions of the Eastern Front

The RIA-Novosti press agency--now known as Sputnik in the West--has one of the world's best archives of Soviet Second World War photographs and for this remarkable book, Alexander Hill has gathered a superb selection of them. These striking images vividly record, as only photographs can, the brutal conflict on the Eastern Front and the extraordinary experience of the soldiers and civilians who were caught up in it.

The photographs and captions take the reader through the entire course of the war--fighting on the front lines and behind the lines, aerial combat and naval warfare. Plus, the ordeal of living under German occupation, the war industries, and the massive sacrifices made at every level of Soviet society to defeat the Germans.