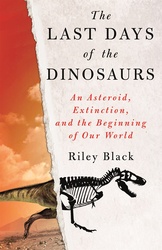 The Last Days Of The Dinosaurs: An Asteroid, Extinction, And The Beginning Of Our World

The day the dinosaurs went extinct...and what happened next

Picture yourself in the Cretaceous period. It’s afternoon in the Hell Creek of ancient Montana 66 million years ago. A Triceratops horridus ambles along. In a matter of hours, everything here will be wiped away and replaced with fire. Tyrannosaurus rex will be obliterated, along with every other non-avian dinosaur. They just don’t know it yet.

This disaster happened when an asteroid slammed into the Earth, leaving a geologic wound over 50 miles in diameter. In the mass extinction that followed, over half of known species vanished. The Last Days of the Dinosaurs describes what happened in the days, decades, and the million years after the impact. Life’s losses were sharp, but the survivors set the stage for the world as we know it.