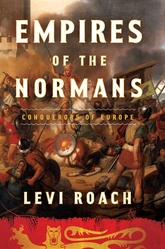 Empire Of The Normans: Conquerors Of Europe

A global history of the Normans

October 14th, 1066. As Harold II, the last crowned Anglo-Saxon king of England, lay dying in Sussex, the Duke of Normandy was celebrating an unlikely victory. William "The Bastard" had emerged from interloper to successor of the Norman throne. He had survived the carnage of the Battle of Hastings and he would be crowned king of England. No longer would Anglo-Saxons or Vikings rule England; this was now the age of the Normans.

Empires of the Normans tells the extraordinary story of how the descendants of Viking marauders in northern France came to dominate European, Mediterranean, and Middle Eastern politics. It is a tale of ambitious adventures, military might, and fierce pirates, of fortunes made and fortunes lost.