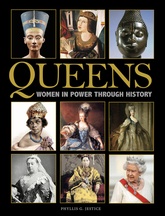 Queens: Women In Power Through History

In a world historically dominated by male rulers, the women who sat on thrones of their own shine brightly. Some queens and empresses were born to greatness, while others fought their way to power. In sixth-century Constantinople, Empress Theodora extended rights for women, passing laws that allowed them to divorce and own property, and made rape a crime punishable by death. In more recent history, Catherine the Great expanded the Russian Empire and Queen Elizabeth II became the longest-ruling queen in history.

Carefully researched, superbly entertaining, and illustrated throughout with more than 180 photographs and artworks, Queens highlights the true personalities and real lives of the women who became monarchs and empresses.