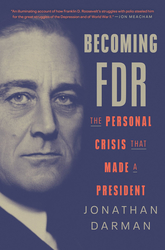 From adversity to greatness

Becoming FDR traces the riveting story of the struggle that forged Franklin Delano Roosevelt’s character and political ascent. Soon after contracting polio in 1921 at the age of 39, the former vice-presidential candidate was left paralyzed from the waist down. He spent much of the next decade trying to adapt to the stark new reality of his life.

When he reemerged on the national stage in 1928, his character had been transformed. He had become compassionate and shrewd, tailoring his speeches to inspire listeners and to reach them through a new medium—radio. Crucially, he discovered how to find hope in a seemingly hopeless situation—a skill that he employed to motivate Americans through the Great Depression and WWII.