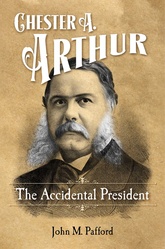 The Accidental President: Chester A. Arthur

When he was nominated as vice president on the 1880 Republican ticket, Chester Alan Arthur had never held elected office. Expectations of him—or of the vice presidential office—were virtually non-existent. Years earlier in 1839, Daniel Webster had turned down the vice presidency with the quip, "I do not propose to be buried until I am dead." But six months into President James Garfield's term, he was assassinated—and the unknown vice president, Chester Arthur, became the most powerful man in America.

This in-depth biography of Chester Arthur is a fascinating look at a man who, thrust unexpectedly into the highest political office, exceeded expectations, and left a lasting mark on history.