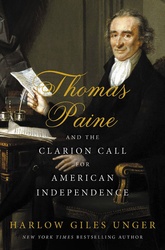 Thomas Paine And The Clarion Call For American Independence

From bestselling author Harlow Giles Unger comes an astonishing biography of the writer whose words helped shape America, inspiring its revolution, and whose ideas about reason and religion continue to try men's souls.

Thomas Paine's words were like no others in history: they leaped off the page, inspiring readers to change their lives, their governments, their kings, and even their gods. In an age when spoken and written words were the only forms of communication, Paine's writing inspired men to action. The most widely read political writer of his generation, he proved to be more than a century ahead of his time, demanding unheard-of social reforms that are now integral elements of modern republican societies.