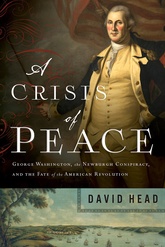 A Crisis Of Peace: George Washington, The Newburgh Conspiracy, And The Fate Of The American Revolution

The first crisis of our fledgling republic

After the British surrender at Yorktown, the American Revolution still blazed on, and as peace was negotiated in Europe, grave problems surfaced at home. The government was financially broke and George Washington’s senior officers were rumored to be on the edge of mutiny. Washington was able to avert the crisis, but with the nation overwhelmed by challenges, his officers ultimately left the army disappointed and confirmed their low opinion of their civilian countrymen.

A Crisis of Peace provides a fresh look at the end of the American Revolution, while speaking to issues that concern us still: the fragility of civil-military relations, how even victorious wars end ambiguously, and what veterans and civilians owe each other.