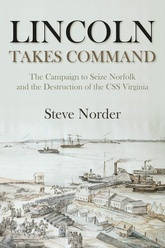 Lincoln Takes Command: The Campaign To Seize Norfolk And The Destruction Of The CSS Virginia

On a rainy evening during the Civil War’s second May, President Abraham Lincoln boarded a treasury department ship to sail to Union-held Fort Monroe in Hampton Roads, Virginia. The trip resulted in the first and only time in the country’s history that a sitting president took direct control of military forces, both army and navy, to wage a campaign with wide-ranging consequences. This little-known slice of the war and its effect on the president is the subject of Steve Norder’s Lincoln Takes Command.

Norder’s years-long investigation draws upon a host of primary sources, including letters, diaries, official reports, and memoirs. This rich blending of material allows for a fresh perspective and brilliant insights.