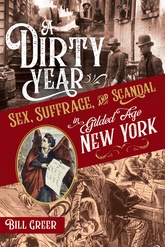 The seedy side of the Big Apple

As 1872 opened, The New York Times headlined four stories that symptomized the decay in public morals that the editors so frequently decried: financier Jim Fisk was gunned down in a love triangle; suffragist and free-love advocate Victoria Woodhull was running for president; anti-vice activist Anthony Comstock battled smut dealers; and abortionists were thriving. Throughout 1872, these stories intertwined in unimaginable ways, pulling in others, both famous and infamous. By the end of the year, this jumble of conflicts exploded in the greatest sensation of the nineteenth century.

In this riveting history, author Bill Greer perfectly captures New York at time when the city was convulsing with social upheaval and sexual revolution.