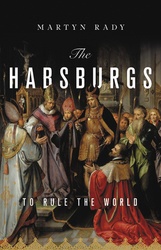 The Habsburgs: To Rule The World

The rise and fall of the Habsburgs

The Habsburgs ruled much of Europe for centuries. From modest origins as minor German nobles, the family used fabricated documents, invented genealogies, savvy marriages, and military conquest on their improbable ascent, becoming the continent's most powerful dynasty. By the mid-fifteenth century, the Habsburgs controlled of the Holy Roman Empire, and by the early sixteenth century, their lands stretched across the continent and far beyond it. But in 1918, at the end of the Great War, the final remnant of their empire was gone.

In The Habsburgs, historian Martyn Rady tells the epic story of the Habsburg dynasty and the world it built—and then lost—over nearly a millennium, placing it in its European and global contexts.