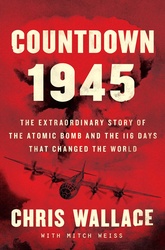 Countdown 1945: The Extraordinary Story Of The 116 Days That Changed The World

From Chris Wallace, the veteran journalist, comes an electrifying behind-the-scenes account of the 116 days leading up to the world’s first use of the atomic bomb in wartime--the American attack on Hiroshima.

After years of bloody conflict in WWII, America is stunned by news of President Franklin D. Roosevelt’s death. Countdown 1945 tells the gripping true story of the turbulent days leading up to August 6, 1945, when the new President, Truman, gives the order to unleash the world’s first atomic bomb. Featuring some of history’s most remarkable leaders, page-turning action, and vivid details, this book is a thrilling narrative of the covert meetings and pivotal developments that took place during the spring and summer of 1945.