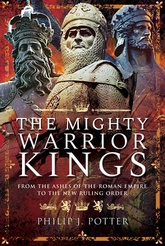 The Mighty Warrior Kings: From The Ashes Of The Roman Empire To The New Ruling Order

The kings who reinvented Europe

The Mighty Warrior Kings traces the history of early Europe through the biographies of nine kings, who had the courage, determination, and martial might to establish their dominance over the fragmented remnants of the Roman Empire.

The book begins with Charlemagne, who united large regions of current-day France, Germany, and Italy into the Holy Roman Empire and ends with Robert the Bruce, who defended Scotland against the attempted usurpation of England. Some of the other kings featured in this captivating book include Alfred the Great of Wessex, William I of Normandy, and Frederick Barbarossa.

From the famous to the infamous, the warrior kings made history with a centralized power base and set the stage for the Age of Absolutism.